While the Wasatch received a decent shot of early season snow, the elevation level was still quite high for the white stuff. There was enough coverage to open a few runs at the resorts in Big Cottonwood Canyon, however the weather promptly returned to fall like conditions in the middle of November. While the skiing wasn’t much to speak of, the desire to get into the mountains was there, which made the calling for a mid-elevation summit appealing. 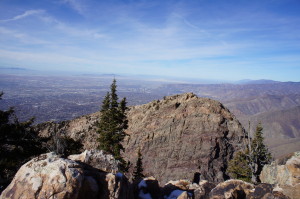 Downtown SLC From the Summit

The trail up Mt. Olympus is steep, and gains around 4100 vertical feet in Just under 4 miles. It’s a great trail for views of the Salt Lake Valley and the surrounding Wasatch Range, and also a great way to add some mileage to your legs while waiting for the snow to pile up.

From the main trailhead on Wasatch Boulevard, the trail steepens right out of the gate, giving a quick warm-up on the 40 degree morning. Layers are soon shed, and after a mile or so, the boundary for the Wilderness Area is crossed. The sounds of the city, and the traffic noise of I-215 at the base slowly fade away. There are a few other hikers with the same ideas as me on the weekday, but interaction is sparse, and the feeling of solitude increases. As the trail approaches the main saddle nearing the summit, I’m aware of some guys hustling up the trail. Clad only in spandex shorts, no shirt, with ski poles, and nothing else, they are practically running up the trail, despite its steep angle. I feel as if I’m in France as they grunt a less than cheery hello as they hustle on by. The trail starts to turn slicker and muddy as the melt freeze of the previous snows are apparent. The views from the saddle across to the SL Twins, Dromedary Peak, Stairs Gulch and Storm Mountain are inspiring. There’s a couple having a lunch break here, enjoying the warmth of the late fall sun.

From here, its a scramble op an easy to follow gully to the summit, another 500 vertical or so. The summit sits at just over 9000 feet, and the views of the valley, immediate Wasatch Range, and the surrounding mountain ranges are revealed. Since the temps are cooling, there is a bit of haze that is settling into the valley below. The euro- runners are beginning their descent, and I ask him what his time is. “56 minutes” he states matter-of-factly, and with an air of superiority.

I’m impressed, somewhat, it took me about 90 minutes longer than that at a steady pace..to each his own. The top is mine for a few brief moments, enough to enjoy a snack, and the view before heading back down. One of my favorite hikes anywhere, and usually much too hot at any other time. I will hustle a little faster on my way down, a cold one awaits.